A theater-critic friend of my father once said that Laurence Olivier played American like it was a character choice. 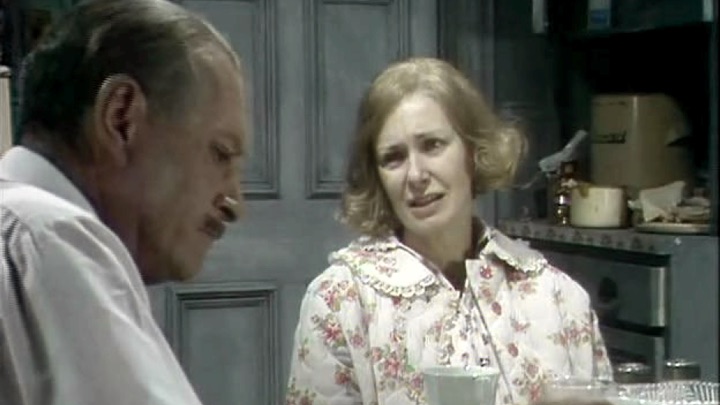 Cameron Kelsall: Last week, we discussed fake Inge in the form of Come Back to the 5 and Dime, Jimmy Dean, Jimmy Dean. I guess it’s now time to take up the real thing. The Kansas playwright’s first major success, Come Back, Little Sheba, has always had a special place in my heart among mid-century dramas. The 1952 film version, which captures Shirley Booth’s legendary performance, is irreplaceable. It’s available on YouTube—and I certainly recommend it—but today, we’re considering a more curious adaptation. In 1977, it was filmed for British television, starring the improbable cast of Sir Laurence Olivier, Joanne Woodward and Carrie Fisher, among others. Those are certainly the names that come to mind when you think Midwestern melodrama—right, David?

David Fox: Yes, indeed! You are, I know, more of an Inge fan generally than I am, though I like Sheba very much, and have also seen at least two very compelling productions—in Los Angeles with Tyne Daly (superb), and in an interestingly reconceptualized version by an ambitious and accomplished local Philadelphia company. Both of these captured, in their very different ways, something centrally Midwestern and mid-century that’s inherent in the play.

CK: I would say the same about the Philadelphia production, which I actually consulted on, and the two other professional productions I’ve seen in New York—the 2008 Broadway revival starring a very good S. Epatha Merkerson and a revelatory Kevin Anderson, and a superb, small-scale staging from the wonderful downtown company, Transport Group.

DF: As you suggest—even with Woodward and Fisher—that’s pretty far off here. In a way, you’ll learn all you need to know in the first two minutes. We see a photograph of BBC’s Granada Studio, with a sort of Renaissance-y pavane musical accompaniment, as if we’re about to watch some Tudor beheading. After proudly announcing that Laurence Olivier was offering a tribute to American Theatre, we suddenly hear a train whistle, and segue into the fakest Midwestern home I’ve ever seen. What we hear throughout supposedly playing on the radio—which is a significant recurring theme in Sheba—is a total mish-mash, including everything from  Leontyne Price’s “Ave Maria” with Herbert von Karajan, to an early 1920s rendition of “The Varsity Drag.” (The play is set around 1950.)

CK: Olivier obviously had an earnest wish to honor American drama—the same series also featured him taking roles in Cat on a Hot Tin Roof (opposite the truly bereft pairing of Natalie Wood and Robert Wagner) and Long Day’s Journey Into Night. But all three productions display a general lack of understanding when it comes to this particular milieu. A theater-critic friend of my father once said that Olivier played American like it was a character choice; after Sheba, I finally understood what he meant.

DF: To be fair, let’s also say that Sheba is more than simply Americana; and Olivier, is, of course, a legendary actor who admirably wanted to show his range. In some ways, I think he’s better here—or least, more interesting—than I expected. He’s clearly trying to create a dimensional character, and there are some very poignant moments. The shots of him deliberately not looking at the whisky bottle in the kitchen are telling. But there’s a sense of staginess to the size of his acting that’s ill-judged in terms of the camera, and he’s notably not good at playing drunk (pretty important here, I’d say). He has none of the absolute ease Burt Lancaster brings to the role on film… nor (even more important) the sense of bottled-up danger. (I think Lancaster is extraordinary, and highly underrated here.)

CK: Olivier largely plays Doc as a courtly older gentleman, which highlights another problem of the production—he and Woodward (Lola) are mismatched in terms of age. He was around 70 when the film was made; she’s in her late 40s. The characters themselves are really in their late 30s, perhaps slightly older. Part of the sympathy Inge derives comes from the sense that they feel hopelessly defeated and resigned, even at a young age. You don’t quite get that when they’re approaching pension-collecting age. Among other points in the original script, it matters that Doc—who feels ashamed that he’s just a chiropractor rather than a medical doctor—had to drop out of college after getting Lola pregnant.

DF: Absolutely. The play really is far more gutting if they’re younger. Days after seeing this, I’m still trying to reconcile my feelings about Woodward. She’s an actor I generally admire very much; she’s basically well-cast here; and she gives an estimable, thought-through performance. But somehow it feels generic. Woodward has a resilience and sturdiness that works against the vulnerability, which of course Shirley Booth—to my mind, one of America’s very greatest actors—had in spades.

CK: Her Lola does seem very together, which is mirrored by her appearance—trim figure, set hair, perfectly manicured red nails. Her housecoat looks suspiciously stylish. When Doc berates her in his drunken episode for being a slovenly housekeeper and a dumpy wife, it seems incongruous to the generally tidy environs we’ve seen throughout the production.

DF: Funny—to me, the house was too old and dirty! But either way, Woodward’s Lola looks pretty together. I do think there are other ways to play that character—she could be more knowing, even a bit vulgar and crude. But Woodward also doesn’t reinvent her in any intriguing way.

CK: It’s Fisher who comes across best. Lovely and youthful, she brings the right flirtatious energy to Marie, the feisty college girl who boards in Doc and Lola’s house. The film catches her on the precipice of her breakthrough with Star Wars, and it’s interesting to see her working so far outside the persona(e) we came to associate with her over several decades in public life.

DF: “Lovely” is exactly the word I’d use about Fisher here. She has a genuine “girl next quality” that once was quite common in films (Teresa Wright would be my paradigm), but rare in actresses of Fisher’s generation. Her life and career, obviously, went in very different directions, but this suggests to me that she could have been a stage actress of real stature. On the other hand, the Turk and Bruce in this production—admittedly, not the most interesting roles—are merely Brand X.

CK: Patience Collier is fun as the forbidding German battle axe next door, but on the whole, the supporting cast is largely undistinguished. Also missing is an underlying sadness in Doc and Lola’s interactions with Marie—she’s around the age their daughter would have been had she survived—but that has more to do with Woodward and Olivier than Fisher.

DF: Underlying sadness is needed here, for sure. But for me, there’s something also inherently, fascinatingly creepy in Sheba that has to do with Doc and Lola’s individual repressed sexualities, played out in their very quirky relationships to Turk and Marie. Here, all of that makes virtually no impression.

DF: I was also put off by the final scene here. First of all, it’s ludicrously cut—even the final reference to Sheba is gone! Inge wrote the last line for Lola; but here, cuts give the final word to Doc, who—in Olivier’s worst moment—sobs and whimpers and completely steals the focus. The 1952 film is also cut, and Lancaster given the final line—but at least we have Booth in the last frame, and the bathos is undercut by a sense of forced cheer that’s even more devastating.