She ain’t down yet

The fabulous Beth Malone is the Molly Brown of my dreams—forthright, bold, and a superbly gifted singer with just the right touch of country twang. 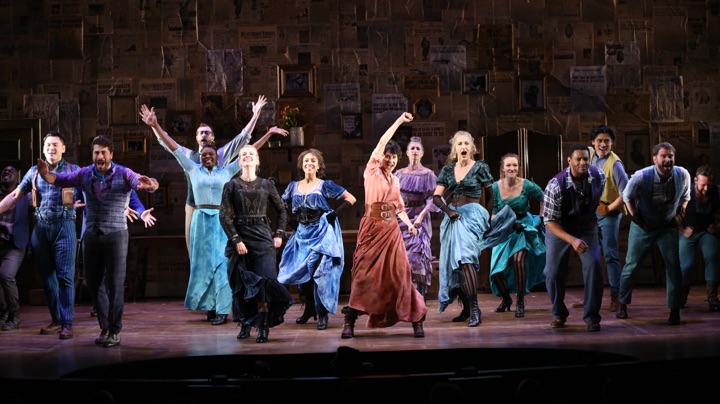 Cameron Kelsall: The Unsinkable Molly Brown follows its eponymous heroine from hardscrabble poverty to the corridors of wealth and privilege, culminating in the 1912 sinking of the Titanic that made her briefly world famous. Throughout it all, Margaret “Call Me Molly” Tobin Brown repeats the same rallying cry: “I ain’t down yet!” David, wouldn’t you say that also sums up this musical—oft-revised since its 1960 Broadway debut, and now back in New York via the Transport Group at the Abrons Arts Center?

David Fox: Yes, indeed. Meredith Willson’s follow-up to The Music Man clearly “ain’t down yet,” though I think even in its first outing, it didn’t exactly recapture the magic of its predecessor. I knew the show only from the original cast album—I still have never seen the film—but from the start, though there are a couple terrific numbers, it didn’t catch fire with me.

CK: Aside from a few of the more recognizable tunes—“My Own Brass Bed” and “Belly Up to the Bar, Boys,” in addition to the previously mentioned “Ain’t Down Yet”—I barely had a sense of the show before taking in this production. It surely doesn’t come close to equaling The Music Man, but what does? That said, I found much to admire in Willson’s storytelling, which has been retooled by Dick Scanlan and Michael Rafter.

DF: Willson as a musical theater composer/lyricist is a bit of a one-hit wonder (Music Man, obviously)—but what a hit that one is! In my absolute top group of musicals for sure, with a vividly personal musical style. And it’s so interesting to hear him use some of that same language here in Molly Brown—a lot of vocal ensemble writing, and in particular a way of setting a kind of slick spieling to music that’s midway between song and recitative… and making that sound very much like Americana. It’s hard to describe, but unforgettable when heard.

CK: Larry Hochman’s orchestrations capture the flavor of Willson’s musical language, and the chamber-sized orchestra employed here nicely balances what I think of as a traditional Broadway sound with country and bluegrass flavors. It’s worth noting that the current version of the score weaves together songs written for the original production, selections from Willson’s back catalog (“He’s My Friend” and “Share the Luck,” for example), and newly created numbers with lyrics by Scanlan set to existing Willson music.

DF: Usually that kind of assemblage is anathema to me, but here what could have been a Frankenstein’s Monster actually works cohesively very well indeed. One of the best aspects of a show that I found often—if not always—wonderful. 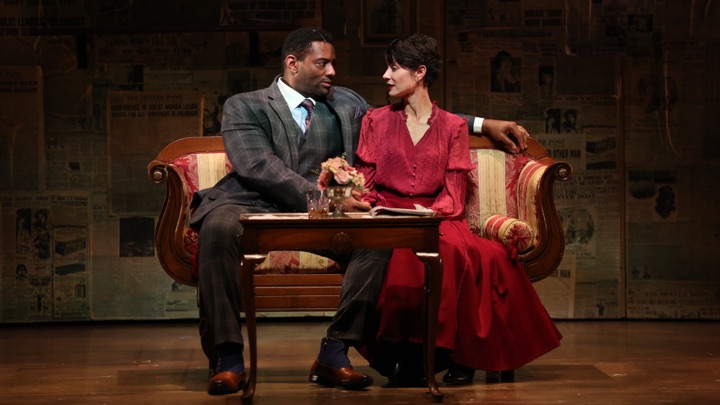 CK: It’s rare these days to leave a musical humming one song, let alone the half-dozen or so earworms that are still wafting through my brain days later. But even more notable is that the added music fits seamlessly into the narrative—nothing to me feels shoehorned in.

DF: There are so many lovely things in this show, so full of heart and good will, but let’s not wait any longer to praise the fabulous Beth Malone, who is the Molly Brown of my dreams—forthright, bold, and a superbly gifted singer with just the right touch of country twang. She also dances very well! She’s as good here as in Fun Home, and she gets to show off a whole other set of musical theater skills.

CK: As I indicated earlier, the role of Molly covers a wide expanse—from girl to woman, scamp to society matron, housewife to political crusader—and requires considerable range from the actor playing her. Malone delivers in spades. She utterly transforms herself from a dirty-faced girl who tramps her way to Colorado to the heroine who’s “girl enough” to wear the beautiful red dress of her dreams. Vocally, I can’t imagine a more ideal fit for this music—she definitely seems more appropriate than Tammy Grimes, who created the role way back when.

DF: I’m a huge Grimes fan in some contexts, but she is, to say the least, a peculiar choice for Molly—less Colorado mining town than Noël Coward by way of a Greenwich finishing school. Nor was she, in 1960 at least, a star. Anyway, while we’re praising Malone, let’s also celebrate the rest of the cast, who I think are exceptionally good across the board.

CK: There’s hardly a weak link, but I found David Aron Damane particularly appealing as J. J. Brown, Molly’s miner-turned-magnate husband. With his booming voice and commanding stage presence, it was no surprise to learn he’s performed at New York City Opera in Porgy and Bess. The Broadway soprano Whitney Bashor also proves lovely and compelling as Julia, an English widow who becomes Molly’s confidante. (The character of Julia is an invention of this production—as is the presence of Leadville, Colorado’s other most famous resident, Baby Doe Tabor, played here by Nikka Graff Lanzarone.)

DF: Agreed on all counts, and I also want to give a shout out to Paula Leggett Chase, who describes herself in the program as an “antique showgirl,” but she’s a lot more than that here! 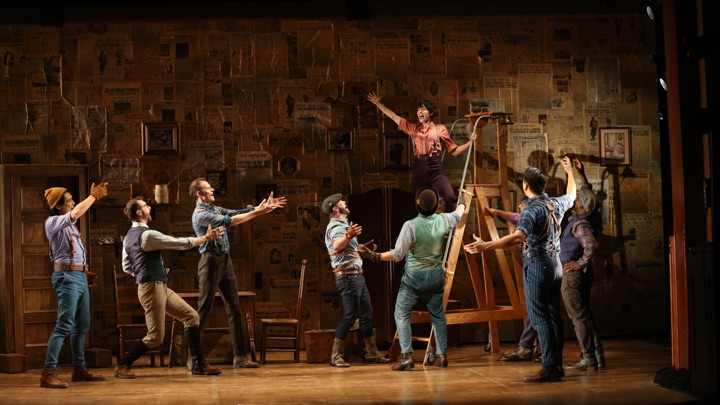 CK: Chase got a lot of laughs in the second act, playing a snobby old biddy with a less-than-refined past. And maybe we should talk about that second act, since it’s where our thinking about the show diverges.

DF: Ah, yes. The elephant in the room: second-act trouble. I do think we diverge on this, but let me start by saying how much I loved the first act, which I thought nearly perfect. I marvel at how well it managed to achieve the right sense of scale—Broadway energy and verve in a chamber space (brava, director/choreographer Kathleen Marshall!)—and I loved the ways that the show itself dealt with our very real current world issues (immigration, poverty, unionization). Some of these were hinted at in the original, but now they’re front-and-center, and—in the first act, at least—beautifully handled.

CK: Indeed. The second act goes full-tilt on these issues, with some fairly blunt politicking and some dialogue that seems designed to engineer an audience reaction. It also toggles back and forth between levity and its serious message—one moment Molly is joking with her maid about cucumber sandwiches, the next she’s leading a charge for criminal justice reform. I take it that didn’t really work for you?

DF: It didn’t. Not because I don’t believe in everything the show is promoting—I do, wholeheartedly—but the tone, which is handled so charmingly in Act I, took on a woke-scolding style that turned me off. But beyond that, I also think the second act here shows signs of multiple rewrites and revisions, and looks far from ready-for-prime-time. I mean, suddenly we’re in a Titanic lifeboat that looks like it’s straight outta Maury Yeston?

CK: I’m not going to argue that Scanlan’s revisions sometimes turn didactic, but as opposed to the terminally slick Jagged Little Pill, I found the tone remained refreshingly sincere. And while I concur to a degree that the Titanic section needs to be fleshed out a bit more, it also introduces the production’s best new song: “Wait for Me,” a ravishing ballad that Malone delivers with equal parts gusto and pathos. Overall, too, Marshall’s direction and choreography maintain a high energy that totally sucked me in. Perhaps this is the kind of show you end up loving in spite of its flaws.

DF: That’s just it. I think I would have been less disappointed by the second act if I hadn’t been so bewitched by the first. And my ultimate takeaway here is far more positive than negative. I would absolutely recommend the show… but I’d make the point that the second act should be looked at as a work in progress. Well, I guess I just did.

CK: Considering the amount of time and talent spent on resurrecting this musical, I cannot imagine the Off-Broadway engagement will be its last stop. So it stands to reason that further revisions are on the horizon, and present kinks will be ironed out. One thing’s certain to me: In reviving this Golden Age gem, everyone involved has struck gold.