The opposite of sex

Since 1934, Philadelphia’s Academy of Vocal Arts has been preparing emerging artists for operatic careers. 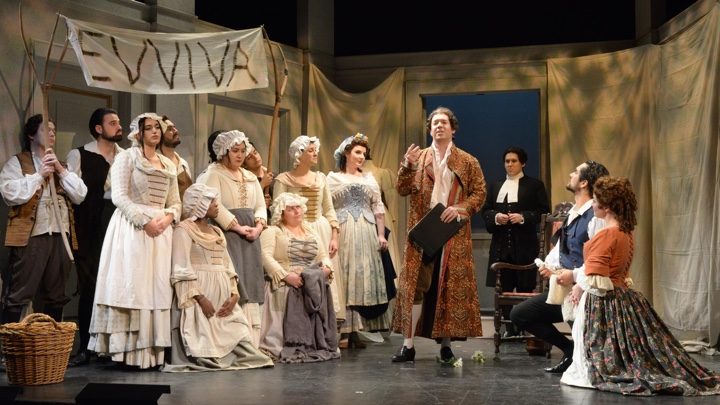 They can boast a stellar track record, including in the last couple of decades, Joyce DiDonato, Michael Fabiano, Ailyn Pérez, and Bryan Hymel (who is now also AVA’s Vice President for Global and Artistic Outreach).

The current crop of artists includes similarly fine voices—if there were no breakout star performances in this week’s Le Nozze di Figaro, it was still a promisingly high vocal standard.

The company track record—in my experience over the last two decades, at least—also includes a quite traditional approach to the operas they produce, both in terms of programming and theatrical style. There’s a good reason for this, of course—part of AVA’s mission is to ready their Resident Artists with a repertoire of roles.

But the limits of this traditionalism are all too clear in Figaro, which looks like a worn, stock repertory production. Under David Gately’s uninspired stage direction, the singers often appear to be playing some generalized idea of what their characters represent, rather than flesh and blood people living in the moment.

A few of the minor characters do come to life, notably Chelsea Laggan’s funny, flirty Marcellina, which is also sung with luxurious tonal amplitude.

But too much of this dazzlingly funny study in class and sex is, well, not sexy. The principals, even when singing well, were largely dramatically inert. This is especially disappointing in Figaro, where Mozart and Da Ponte’s dramatic instincts are every bit as brilliant as their musical ones. Here, they were largely unrealized.Musically speaking, we were on stronger ground, and if it wasn’t a superlative performance, it was often a satisfying and promising one. 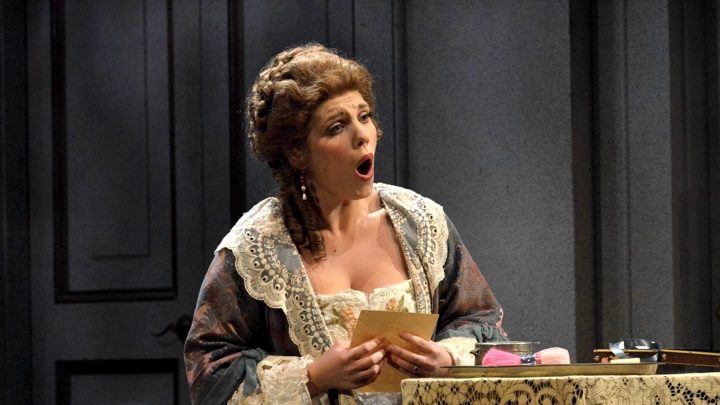 Christofer Macatsoris led his good orchestra in a lively, propulsive performance. I especially admired the deft way they kept the recits flowing, not breaking for applause and keeping the momentum.

Timothy Murray’s Count was the major find among the principals, with a strong sense of legato, and consistently making his points through the musical line. Murray’s warm lyric baritone has a pleasingly fast vibrato, and he handled the difficult concluding bars of his aria better than many more famous baritones. Bravo!

Aubry Ballarò brought considerable sparkle to Susanna, and her lyric soprano also has color and body in the lower range. She’s stronger on perkiness than lyricism—her “Deh vieni, non tardar” lacked the magic stopped-time quality it can have. (She would probably have done better with “”Venite,  inginocchiatevi,” which was cut here.) Similarly, Kara Mulder as the Countess has a lovely lyric soprano and striking stage presence, but she needed more repose and float in both arias.

Brent Michael Smith (Figaro) is also a vivid performer, whose dark good looks and nimbleness will no doubt be an asset to future productions. His bass sounded best in “Aprite un po’ quegli occhi”— earlier, the lower range wasn’t always well-projected, and the role’s higher passages lie outside his comfort zone. Pascale Spinney was an energetic Cherubino — her tangy, soprano-ish mezzo is a particularly good fit for “Voi che sapete.”

We’ll have a chance to hear Spinney and Smith again—in very different challenges—in February, when AVA mounts La Favorite. Donizetti’s opera remains a relative rarity in the U.S. at least, particularly in the original French — my hope here is for a staging here that is likewise unclichéd.