Sweeping down the plains

Within minutes, something wonderful happened. None of my reservations mattered. 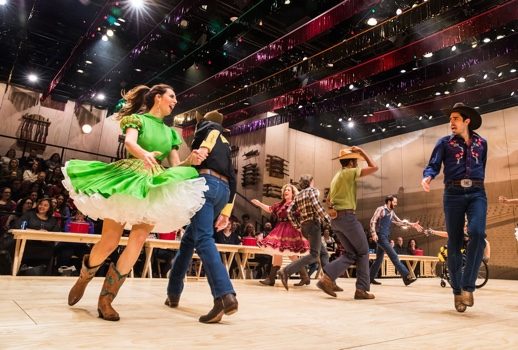 The response of my friends and colleagues to director Daniel Fish’s cause célèbre reworking of Oklahoma! reminds me of the show’s proverbial Farmers and Cowmen: opinions are loud, confident, and largely polarized. I’ve heard it passionately praised (“I was an emotional puddle; I wept and couldn’t stop!”) and bitterly denounced (“I couldn’t bear to listen to it!”), but not much in-between.

I’ll say from the outset that I’m pretty fervently in the former camp—this was the most thought-provoking and frequently thrilling three hours I’ve spent in a Broadway theater in years.

But I’m not here to play Aunt Eller, Oklahoma!’s gun-toting peacemaker. Still, I will suggest that, while we may not all agree, there is some middle ground.

In that spirit, I’ll start by acknowledging the areas where this production loses me—and almost all of them are musical. It’s not the twangy, small-scale orchestrations by Daniel Kluger. They are less lushly romantic than the originals, for sure, but I found them delightful, as well as superbly played by the onstage orchestra.

The bigger issue for me is the singing, which, frankly, I wish was better.

To call it “pitchy” would be generous. Denver Milord, who stepped in as Curly in the performance I saw, could hardly have been more charismatic, but his “Oh, What a Beautiful Mornin’” was consistently, painfully flat. Other cast members audibly struggled. Rebecca Naomi Jones (Laurey) and Mary Testa (Aunt Eller) have fine voices that here are awkwardly out-of-kilter with the score’s tessitura and style.

Ali Stroker (Ado Annie), Oklahoma!’s breakout star, is really alone in this company in having a superb musical theater voice that is also ideally suited to her role, and her dry comedic delivery is similarly stellar. But she gooses the musical line way too much for my taste. Everybody plays fast and loose with rhythm. 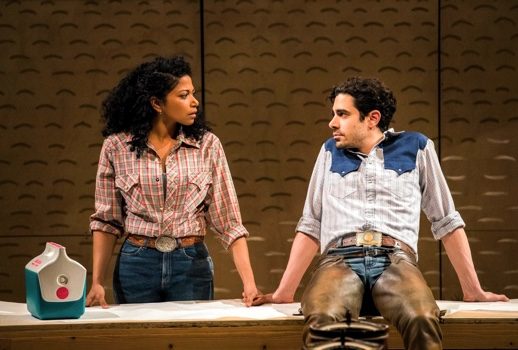 In fact, my early exposure to some musical excerpts from this production initially kept me away. I overcame my resistance, mostly because I’m teaching Oklahoma! in the fall as part of a musical theater history course—but my expectations were low.

Sitting in Circle in the Square, listening to the first scene or two, I realized that some of the points I love to make about Oklahoma! would not be borne out so well here. It’s hard to recognize, for example, that this musical that broke new ground in 1943 is also linked to a traditional kind of delineated character writing for romantic-versus-comic leads that we can trace back to Die Zauberflöte.

Or that Rodgers and Hammerstein’s far more serious work here also frequently traffics in problematic dialect comedy that was a vaudeville staple, left over from decades earlier.

And then, within minutes, something wonderful happened. None of my reservations mattered. Even the musical limitations seemed to fall away—moreover, these performances sounded just right in the context of a show that was palpably working its theatrical magic.

One key element of this Oklahoma!that I think has been underappreciated in the reviews I’ve read: it is superbly acted. I’ve never seen the book of a traditional musical given this level of insightful text work, and the results are revelatory. Jokes I thought might have felt hoary in 1943 seem newly minted and genuinely funny (James Davis as the lovable but dim Will Parker is especially good here).

Even more strikingly, the characters emerge as complex human beings, often stranded at a personal impasse. Jones’ translucent Laurey is a particularly good example, as is Patrick Vaill—the scariest Judd I’ve ever seen, but also the most poignant and vulnerable.

Some of what Fish does here will be more familiar to opera audiences who are used to seeing contemporary and avant-garde theatrical techniques appliqued on familiar material. But that approach is still a rarity in popular musical theater stagings, especially on Broadway. (This production originated as part of the Bard Summerscape festival, and played a successful engagement at St. Ann’s Warehouse in Brooklyn before this Circle in the Square incarnation.)

Nowhere has this been more evident than in productions of shows by Rodgers and Hammerstein, whose vigilant supervisory organization has for years consistently—to the point of litigation—“protected” their canon against interpretation. That the leader has finally changed positions and opened the works to new possibilities is cause for rejoicing, and Fish’s production is invigorating proof of the wisdom of that change.

In the end, here are two examples among many that this Oklahoma! gets so startlingly, brilliantly right:

I hope my students who are lucky enough to see this Oklahoma!will find all of this in it, too. And if that’s what they take away, rather than the connections the show has to Zauberflöte and vaudeville comedy? I am totally OK! with it.