When off-off was on to something

Promenade is a powder keg but the powder may not be as explosive as it hints. 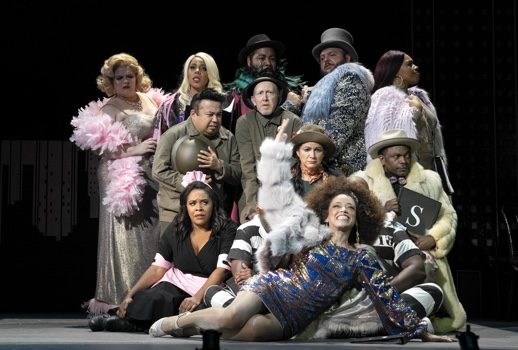 Bliss it was in that dawn to be alive. A sort of bliss. No one was sure where the musical form was going to go. Off-Off Broadway, they experimented in all directions. Heavier rock, lighter rock, no rock at all, no music at all, no lyrics at all, rock opera, ballad opera, folk opera.

One experimenter was Al Carmines, minister of the Judson Memorial Baptist Church, a congregation at the forefront of all the liberation movements in Greenwich Village and an artistic venue besides. Carmines is said to have composed eighty musicals in one style or another, but his music remained resolutely old-fashioned, based in the hymn tunes and folk ballads of his youth.

That mated oddly with shows about gay rights (The Faggot) or religion and bomb-throwing (Joan) or W.C. Fields (W.C.—his only attempt at a commercial Broadway score; the title may have killed it).

His greatest successes were settings of Gertrude Stein, In Circles and The Making of Americans: the half-familiarity of his tunes suited her jazz-hands poetry, provided it with a sort of unconscious meaning to fall back on when the words led into awkward corners. They resemble Virgil Thomson’s manner with Stein.

Thus we come to Promenade, his collaboration with Maria Irene Fornes, whose lyrics fought a very Steinian war with drama. Song clichés often peter off: “For a moment something about you appealed to me – but the moment has passed.” “Perhaps if I kiss you, you’ll understand (she kisses each of them) – or perhaps you won’t. It doesn’t matter.” “I told you I would love you and then I didn’t, but you must remember I’m very forgetful.” (None of the verses rhyme.)

Set by Carmines and sung with the fake intensity of a lounge singer, these songs bewildered and reassured at the same time. And when a few of the tunes launch at once, the soaring harmonies sound like we’ve stumbled into Sullivan or Verdi.

Fornes, one of the queens of this rebellious, uncommercial era, devised plays that owed nothing to any tradition, that went her own way. When she wrote Promenade, she seemed half-inspired by Brecht-Weill political theater. It was first given at the Judson in 1965, then in a gaudier full-scale production in the not-quite-Broadway Promenade Theater in 1969 (Madeline Kahn was Miss O; Alice Playten, fresh from Hair, was Miss U). This was still a small-scale theater, however. 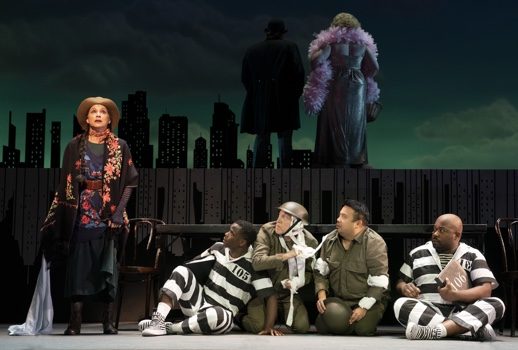 Mainstream critics didn’t know quite what to make of it. (Musicals with a political bent—hadn’t they died out back in the thirties?) Audience reactions were mixed, too. It was a show loved by the young, though nothing could have been further from rock ‘n roll. I was taken to it for a birthday treat, and loved it. But it did not run very long and (like other cult musicals) has not proved easy to revive. There’s a Broadway cast album, rightly treasured by theater nerds.

Aside from the (surprisingly numerous) fans of the first run who showed up at City Center for the Encores! Off-Center revival on Wednesday and Thursday last week, no one knew what to expect. No one knew back in the day either. Carmines was always tuneful but subversive, and Fornes’ plays were never the same twice.

Promenade is a powder keg but the powder may not be as explosive as it hints. Where Brecht and Weill shoved a fist in your face, Fornes pats your cheek ironically, while Carmines reminds you of naughty nineties music halls and hymns. Good. Brecht and Weill are far too easily guyed, and that field has been ploughed to the bedrock.

The plot—so far as there is one—is whimsy and parable and wordplay. “God gave us reason just to confuse us.” Having opined this, Fornes sets out to demonstrate. There are two convicts, 105 and 106, and a tyrannical jailer.

The convicts escape. They stumble into an aristocratic banquet, and stay—why not? They’re hungry! You can tell whether a character is upper class or not because, while all the words are nonsense, the aristos sing nonsense about love. The lower orders are more concerned with philosophic questions and, you know, food and drink.

I walk down the street – a mean look on my face –
A cigarette in my right hand – a toothpick in the left –
To alternate between the cigarette – and the toothpick –
Ah, that’s life!”

That’s the Servant at the banquet, who elopes with the convicts once they have burgled the slumbering partygoers. They have to run because the Jailer keeps tracking them down. (Perhaps this gave the creators of Les Miz their big idea. Or perhaps it didn’t.) They run into an old lady searching for her long-lost babies, who may be the convicts. Or they may not be.

“I know everything –
Half of it I really know; the other half I make up.”
Is that the Mother or is it Fornes herself?

Act II opens on a battlefield, soldiers (and the convicts) being shot at while writing letters home, until the Mayor and the aristocrats arrive to review the troops. The Jailer arrests everybody—of course the upper classes refuse to stay in a mere… jail. The convicts say farewell to their true love, the Servant, and bed down. After all, tomorrow is another hole in the wall.

It’s curious to find Promenade on the Encores! list, since the beloved revival organization prefer shows with plenty of dancing, and Promenade is not a dancing show. Hope Boykin, however,had the singers perform their numbers with dancey steps that gave their ditties a happy effervescence.

Then there is the venue. City Center, where so much great opera, dance, theater has been performed, is an enormous, ungrateful barn. The original Promenade was given in small theaters with no amplification of any kind, and the crazy lyrics were clear, the crazy skits in your face.

At City Center, everything was distant and amplified—monstrously amplified. The sound was an unpleasant shock. The lyrics were not clear, they were negligible. The whimsical score often felt heavy and slow despite the charming small band accompaniments led by Greg Jarrett.

Promenade’s lightness, archness, make a light style essential if the fable is to succeed. Farce has longueurs when the next pratfall becomes too predictable—Fornes, in her script, tried to hurry things along and keep the jokes unexpected, and this should not feel like grand opera.

So I arrived with ancient expectations. Encores! decided the best way to handle expectations was to do an unexpectable piece in an unexpected way. Except for the amp level, they largely pulled it off. The roar of delight that met the final curtain suggested success; also that, after half a century, New Yorkers have developed a sense of humor.

Laurie Woolery’s production, set against a backdrop of Donyale Werle’s lit or painted Manhattanscapes, appears to derive its point of view from the resemblance of Carmines’s music to the backwoods tunes of Minstrel Shows.

Perhaps the aristos’ names suggested this: Mr R, Mr S, Mr T, Miss I, Miss O, Miss U. In the original Promenade they were all affectedly too-too, holding themselves aloof as if draped from hangers, and though they sang obsessively of love, it was impossible to imagine any of them actually engaging in coitus. They simply had nothing else on their vacant minds. They were WASPs as hippies loved to imagine WASPs.

The finest anthem of the score is their ecstatic hymn to unrequited love:

Passionate lips are sweet
But oh, how much sweeter are lips that refuse!
Don’t love me, sweetheart – or I might stop loving you.

Naturally, they do not pair off after they have sung it.

At Encores!, clothed by Curt Ramos in spectacular fur overcoats, the men appeared to be old-fashioned pimps, and the ladies in his glittering metallic shmattas were old-fashioned… ladies-of-the-evening. The surreal setup had been sexualized. WASPs were no longer being sent up. Bertolt Brecht (who divided his world into pimps, whores and two or three as yet uncorrupted innocents) would have been tickled, but what does it achieve for Fornes?

It is, however, a genuine style, and Promenade requires emphatic style. Mostly, it worked. Some moments dragged, but they did so because the size of the theater combats a small-scale show. That has been true of other Encores! presentations at the City Center.

The best of the cast made me wish I could hear them do the piece again un-mic’d and in a room of the proper size. The operatic range and emotional surge demanded of Soara-Joye Ross (Miss O’s “The Moment Has Passed”) and Marcy Harriell (Miss U’s “Capricious and Fickle”) was a happy sensuous cocktail tossed in our faces.

It was wonderful to hear these songs from women with the training to put them across. They did not belt—perhaps they would have had to without amplification. Carmen Ruby Floyd (Miss I) sang “A Flower” prettily—I don’t recall this song, which is perhaps a later insert.

The ladies were partnered by Eddie Cooper, J.D. Webster and Daniel Everidge, an superb trio of solid voices, as R, S and T. It was impossible to keep track of who was unrequitedly in love with whom, but (as Fornes points out) it doesn’t matter anyway.

James T. Lane and Kent Overshown played the convicts who lead us through the maze and home again. Both farced it up well, but Lane seemed to have a frog in his throat. Overshown, however, is a discovery: a sturdy figure with a deeply ingratiating bass-baritone, sexy and sly. I hope we’ll hear lots more of him.

Bonnie Milligan, a soprano of a certain avoirdupois, reveled in the cabaret sendups of Miss Cake, for which she was ideally cast. She rejoiced in every swivelworth of flesh, to general acclaim.

The tyrannical Mayor was played with mannered menace by Becca Blackwell, who kept it low key, subtle in reference. The satire stands on its own, and the Mayor’s wacky, meaningless diatribe, written half a century ago, did not require any changes at all to remind us of recent garbled press conferences today.

Saundra Santiago was not really old enough for the Mother—or she simply chose to play it the same age as all the characters who might be her children. That casts doubt on her memories of long lost babies, but it’s never certain whether she believes in the memories.

We wouldn’t have had a chase, a pursuit, cliff-hanging climaxes or someone to hate without the lascivious Jailer, and Mark Bedard, with a caricature stride out of the Keystone Kops by way of Groucho, threatened us all, while reassuring us that the powers that be would never conquer.

Among the innumerable supernumeraries and faces in the crowd, all played by Steve Routman or Don Darryl Rivera, I found Rivera’s letter song and strong tenor appeal to a (never encountered) Madeline especially affecting.

Wonderful to hear Promenade again. Its satires on the rich and the powerful and the loveless love-obsessed may have become even more relevant. Or perhaps they haven’t. It doesn’t mean anything anyway.