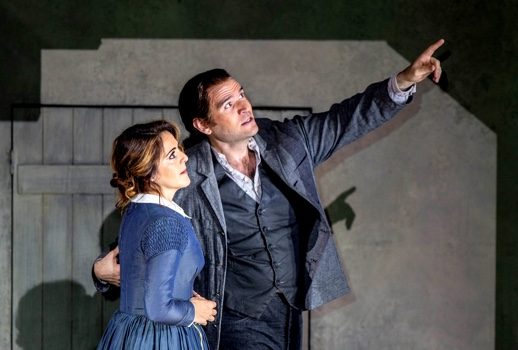 With the orchestra strike happily settled, Lyric Opera of Chicago resumed its season on Wednesday evening with the new-to-Chicago production of Puccini’s perennial audience pleaser La bohème.  It was a spectacularly sung, dramatically riveting evening surrounded by a production by Richard Jones that only really worked for one of the opera’s four acts.

That was the second act, the Café Momus scene, where set and costume designer Stewart Laing pulled out all the stops, with boulevards transforming into a very upscale Café, with waiters pouring champagne for well-heeled patrons seated at linen-clad tables.  It’s a bit of a wonder that the Bohemians were allowed to enter in the first place.

But the act, much helped by Mimi Jordan Sherin’s colorful lighting, was a visual feast. Contrast this with the artists’ garret of Acts One and Four, here looking like a hayloft without any hay, just a tiny stove, one chair, and one shabby pallet on the floor with an ancient pillow so ragged that one could almost see and feel the bedbugs. And we are to believe that all four Bohemians lived here?  The setting looked cartoonish and lacks any sense of romance.

Act Three was somewhat better, though the Gates of Paris are not present and the Inn where Marcello and Musetta work looks like a barracks.  And at the end of the act, while the two couples are singing downstage, the barracks/inn inexplicably begins to move, apparently in order to facilitate the scene change to Act Four. But one could feel the audience lose its focus on the singers while wondering, “Why is the Inn sailing away upstage left?”

But, nonetheless, the music-making persisted and thrived, despite the production’s shortcomings.  Debuting conductor Domingo Hindoyan led the Lyric Opera Orchestra in a restrained, sensitive, and detailed reading of Puccini’s lush score that sounded more romantic than ever.  I heard nuances in the music that I hadn’t heard in any of the 10-plus Bohemes I’d previously heard.

And the Lyric Opera Chorus and the Chicago Children’s Choir enlivened Act Two with splendid singing and crisp movement.

Italian soprano Maria Agresta has completely made the role of Mimi her own.  She sang throughout with liquid tone and limpid beauty.  Her “Mi chiamano Mimi” in the first act was a model of how to shape an aria that moves from sadness to joy in a seamless whole, using her vocal plushness to create a touching, vulnerable characterization.

And her death scene was the most harrowing of my experience.  This Mimi did not simply cough beautifully as she expired—Ms. Agresta suddenly produced three frightening gasps, as if Mimi were desperately trying to catch her breath.  It was shocking yet utterly realistic.

My past Mimis have included Scotto, Stratas, and Netrebko, but Maria Agresta was the most believably human of them all. 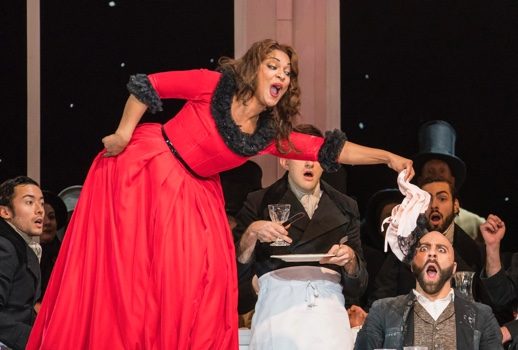 She was ably matched by the clarion tenor of Michael Fabiano, an ardent and passionate Rodolfo, singing with golden tone and a musical sensitivity that made for a multi-faceted characterization of the young writer.  There was a hint of strain on his very highest notes, but he brought admirable warmth and youthful vitality to the impulsive Rodolfo.  And he, too, gave us a clear picture of a heart in agony as he realized that Mimi had died at the end.

In Musetta, Danielle DeNiese has finally found a role that perfectly suits her voice and fiery temperament.  Though she is directed to play Act Two far too farcically (dancing drunkenly on table tops and shimmying out of her panties then dangling them before Marcello were waaaaay over the top), she sang a sultry and sexy “Quando m’en vo” and completely redeems herself in Act Four with her moving ministrations to poor Mimi.  Her prayer to God to save Mimi was  extremely moving.

Baritone Zachary Nelson produced a very fine Marcello, passionate yet filled with the joy of life and a great sense of humor and comic timing.  Nelson’s solid presence and velvety baritone, combined with his fine acting skills, made him a pleasure to watch and hear.

Romanian bass Adrian Sampetrean, memorable in last season’s I puritani, was here a rather colorless Colline, and his famous “coat aria” in Act Four packed no emotional punch.  Also rather pallid was Ricardo Jose Rivera’s Schaunard, with a voice a size too small for the cavernous house.  Jake Gardner was an admirably understated Benoit/ Alcindoro.

Director Jones guides the proceedings generally well but occasionally swerves into vulgarity—must Rodolfo really sniff his armpit before he opens the door to Mimi?  Then there’s the aforementioned panty business of Mimi, and the absurdly childish business of the Bohemians’ drawing cartoonish breasts on the walls of the garret in Act Four.

But credit Jones and his designers with the most glorious visual effect—the stunning snowfall in Act Three, lit beautifully in front of the black background.  It almost brought me to tears.

Despite the production quibbles, this Boheme is a thoroughly enjoyable evening.  The production returns in January with two added performances to make up for the ones lost to the strike.

Finally, I overheard a lady waiting behind me in the cab line after the show: “Why did they throw all that money into an opera that sells itself? I mean, even my husband likes La bohème!”