Rigoletto on the fringe

Tanglewood may bring the classical music crowd to Lenox, but for opera, it’s all about neighboring Pittsfield, Mass. 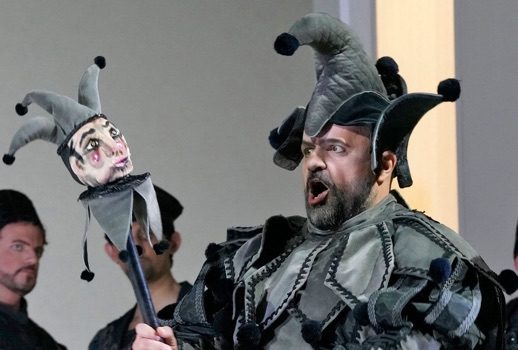 Tanglewood may bring the classical music crowd to Lenox, but for opera, it’s all about neighboring Pittsfield, Mass.

That’s where for three summers now, fledgling company Berkshire Opera Festival has been slowly making a name for itself at the Colonial Theatre, crafting sleeper hit productions for an ebullient crowd of local buffs, while drawing increasingly big-name artists to the Berkshires.

From top to bottom, it’s a team of youngsters: general director Jonathon Loy and his co-founder, musical director Brian Garman, have wisely prioritized top-shelf voices over lavish sets and costumes, with intimate productions that, while at times a bit downmarket-looking, frequently sound as heavenly as anything you’ll hear at the Met.

As with last year’s exquisite Ariadne auf Naxos, this year’s Rigoletto serves up a regrettably brief run and is in dire need of a well-heeled benefactor—just three performances, ending next Friday—but does an exemplary job of honoring the composer’s intent. What truly elevated the production I saw, however, were the fun, fringe-comedic flourishes that too often get lost in more traditional stagings of Verdi’s mid-career opera.

At its core, Rigoletto is a hit parade, based on a popular hit Victor Hugo play and commissioned for Teatro La Fenice’s 1851 carnival season. It’s Verdi at his um-pa-pa best, wall-to-wall jukebox, and it’s easy to forget that for the first years of its life, it had trouble getting past the Venetian censors. (“The Duke must be an utter libertine,” groused a frustrated Verdi, upon seeing how his collaborator, librettist Francesco Maria Piave, had caved to the Direzione’s proposed alterations.)

Fortunately, much of the work’s original smarminess was left intact. This is 16th century Mantua, a Duke’s playground in which women are flowers to be plucked and then cast aside, this one or that one, a conceit suggested in Loy’s production by a dancer (choreographer Ana Luiza Luizi) who ultimately gets swept away by the courtiers in act one.

Otherwise, the production offers scant sense of context, and, on the whole, the creative team appears to have opted for a kind of dark minimalism. Scenic designer Stephen Dobay and lighting designer John Froelich adorn the stage with such a skeletal hand, the thing reads more like a concert recital than a fully realized, evening-length drama.

Costumes by Charles Caine are period-appropriate but similarly undistinguished, an atonal wash of empire-waisted grays and blacks. (I will say that dressing the male choristers in Bob Fosse-ready black tights and glittery sequined smocks was a nice touch, one Liza would certainly have embraced with open jazz hands.)

Yet while a pared-back staging may have generated several unintentional camp moments on opening night—most readily to mind springs an episode featuring court nobles climbing a ladder to nowhere to abduct Rigoletto’s daughter—both Garman’s measured conducting and the voices onstage more than made up for the overall spartan effect.

With his smoldering, Hvorostovsky mien and pinging sound, Jonathan Tetelman, so appealing earlier this summer in Tanglewood’s rained-on concert staging of Bohème, brought great oily verve to the Duke of Mantua. Tetelman’s got talent in slick spades.

Turning in a well-sung “Donna è mobile,” the tenor spun overweening divaliciousness out of a silver lamé space-cape and no-show spandex, and even pulled winking comedy out of the libretto: Gilda, he explains, “almost made me believe in virtue,” occasioning bursts of laughter (and some applause) from the audience.

Despite signs of mild vocal fatigue in the last act, Romanian-born baritone Sebastian Catana delivered a persuasively tragic, if understated, court jester, particularly riveting in the first act’s duet with his daughter Gilda, herself ravishingly played by Maria Valdes.

Valdes, another star in ascendance, was in excellent voice on opening night, her “Caro nome” sung almost entirely seated, from the floor. At least for this reviewer, it helps that the soprano’s also a fine actress and looks more than a little like a young Renée Fleming, though her sound has a sharper, more youthful edge in its upper reaches—a nice touch for a doomed jester’s daughter torn between chaste duty and adolescent desire.

But the show’s surprise delights came in the form of its supporting players, the interventions of wry character singers like the Marullo of Nicholas Martorano, the assassin Sparafucile of Joseph Barron, mezzo Maya Lahyani’s hilariously dry Maddalena, all of them witty performers. I don’t think I’ve ever cackled at Gilda’s put-upon caretaker Giovanna quite so hard as I did whenever Mary Ellen Verdi took the stage; her staunch characterization threatened to steal the spotlight from those other actors she purported to serve.

All these flashes of comedy, somewhat unusual for a maudlin opera such as this one, came as bursts of insight, yielding a production that felt somehow sharper, smarter, than your standard Rig. Ultimately this production served an important reminder that a superlative cast can more than make up for a modest budget.