Salieri's La Cifra (“The Cipher”) played all over Europe for 20 years, in several translations (German, Spanish). Then, like many a worthy work, it was forgotten. 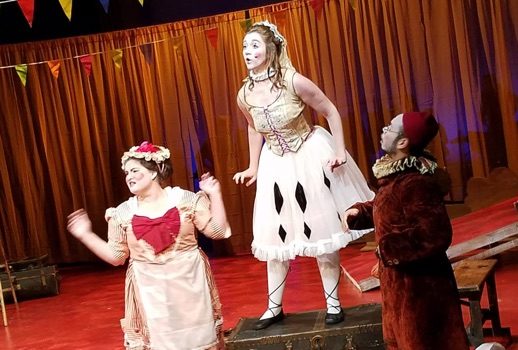 In Rome, in 1780, Antonio Salieri composed an opera buffa to a libretto by someone named Petrosellini, La Dama Pastorella, which might be translated “My Lady Shepherdess.” There’s this shepherd’s daughter, see, but she turns out to be the long-lost child of a count, as one does in opera.

Nine years later, in Vienna, Lorenzo da Ponte and Salieri reworked the piece, renaming the it La Cifra (“The Cipher”) to direct attention to the plot’s MacGuffin. You can guess how much da Ponte trimmed by comparing this swift-paced farce with a sprawling bore like Mozart’s pre-da Ponte La Finta Giardiniera (1775), derived from similar commedia dell’arte boilerplate.

The revisal played all over Europe for 20 years, in several translations (German, Spanish). Then, like many a worthy work, it was forgotten. Cecilia Bartoli recorded one of the arias on her Salieri album.

Saturday night, the Dell’Arte Opera Ensemble dug it up (their second Salieri essay, after his much later Falstaff) and will give it three more times through next Sunday (in rep with Don Giovanni) at La Mama on East Fourth Street. The opera has the amiability of so much pre-Mozart comic opera: the characters are “types,” and their arias are tuneful statements of character.

What we lack here are small, active concerted movements, the duets, trios, quartets that rush the plot along while illustrating character in response to events. That was the revolution Mozart and da Ponte wrought with Figaro and Don Giovanni; in La Cifra, we glimpse the ante-Nozze-rian age. There is much that gives pleasure, but it’s clear why operatic evolution passed it by.

This is especially obvious in the elaborate everyone-gets-caught-in-a-terrifying-storm-while-out-hunting concertato that concludes Act I. This thrilling number prefigures the catastrophic finalettos of later melodrama—and, singing, orchestration, stage effects and all, is great fun on its own.

The hero of this presentation is stage director Brittany Goodwin, assisted by minimal sets (Matthew Iacocco) and much colorful plaid (Claire Townsend’s costumes—the story is set somewhere in Scotland because … why not?). Goodwin has played up the farce in innumerable inventive ways and the singers have played along with her.

Ladders, shovels, steamer trunks and the occasional branch (to show we’re lost in a forest) are made proper use of. Knightly intruders are mounted on hobby horses, peasants dig for treasure in those trunks, and facial expressions turn properly fatuous when incarnating scenery. Singers who can dance a wacky step or two during their airs (or their recits) have been encouraged to do so. There is even a wild boar.

A peasant named Rusticone has two daughters—or does he? One of them was actually confided to him (with considerable treasure, in a chest afflicted with a cipher) by a dying nobleman, and now that he has become mayor and the girls are marriageable, Rusticone feigns confusion as to which is his and which the contessa. He also conveniently forgets about the treasure chest.

The arrival of Milord, who is engaged to the lost lady, puts the mayor’s wiles to the test. It doesn’t help his cause that one of the girls is flirting with three men at once and believes she is a natural noblewoman. The other daughter grabs a rifle and kills the wild boar, so (if you are up on your eighteenth-century symbolism) you know she must be of noble birth. But can this be proved?

Dell’Arte’s small orchestra under Catherine O’Shaughnessy took some little time to rev up to their task, but after a scene or two the old buggy was humming, and the multiplex Act I Finale a triumph. The melodies were unassumingly pleasant, allowing the singers (especially the comic ones) to hold center stage.

What they lacked were those delicious intrusions from flute or cello, a riff here, a hook there, that gives us a personality (or a joke at the character’s expense) in a Mozart aria so that we feel the “type” is an individual, is someone we know. La Cifra plays so well we understand why Salieri was so popular, but also why Mozart was a giant in comparison.

The comic singers were the stars on this occasion—probably on previous occasions too, with this work. Mezzo-soprano Allison Gish is a natural cut-up who warbles to flirt and vice-versa, her full-flavored mezzo exulting in the musical delights of Lisotta’s imaginary wedding to Milord.

Jay Chacon, a melancholy clown with an agreeable baritone, is her actual fiancé, Sandrino, not that that secures him much of her attention. Angky Budiardjono brings a quite distinguished bass to the connivings of Rusticone, along with a masterful array of scowls and snarls and wagglings of the foot or hand to keep us aware of his utter lack of scruple. (What fun Rossini would have had setting these two off against each other! But that was a generation later—it never crosses Salieri’s mind.)

One thing especially noteworthy in all the performers was the attention they paid to the recits (assisted from the harpsichord by company director Chris Fecteau), putting across their meaning and dwelling at sensuous length on words like “sposalizio.”

The more exalted members of the cast (in pre-modern opera, higher voices symbolized higher caste) were principally represented by Timothy Stoddard, who brought a likeably flowing tenor to Milord, and Stephen Steffens as his aide, Leandro, a charming cut-up who sang with a rather raspy sound.

The greatest challenges (and the grandest aria) fell, however, to Rachel Barker-Asto, as Eurilla, the cradle-changed countess. Eurilla is supposed to be well-bred and retiring beside her flamboyantly vulgar foster sister, Lisotta, and at first I thought that was what Barker-Asto was playing.

But her lack of sparkle, of both stage temperament and voice, endured throughout the performance. There was a dullness of pitch in her singing and a dullness of eye in her cutting up. A certain brightness appeared only towards the conclusion of what I shall continue to think of as the Bartoli aria. It was not enough to win us over. But by then it was 11 o’clock, at least in theater terms. (The show actually only runs two hours.)

Happily, the cutting-up of the rest of the cast carried the day and made us glad to enjoy the view of a simpler operatic era. La Cifrashould prove valuable to music schools; young singers trained for Mozart would have great fun with it and never strain their youthful chops.