Born on this day in 1932 actress, dancer and singer Liliane Montevecchi.

On this day in 1965 soprano Renata Scotto made her Metropolitan Opera debut as Cio-Cio San.

A much-heralded Italian soprano, Renata Scotto, long heard about but never heard in New York, finally made her Metropolitan Opera debut Wednesday night in the title role of the season’s first performance of “Madama Butterfly.” It was an occasion for rejoicing, and there was plenty of it in the form of applause and welcoming shouts to the new artist, who above all, is distinctly an individual.

Miss Scotto, as a prima donna, harks back to the days when it was assumed that, to be imported by the Met, you had substantial voice and experience, and the New York test was one of communication of personality. Wednesday night, Miss Scotto arrived with all three, and if she went her own way in portraying Cio-Cio-San-that is, outside the proscribed bounds of the effective Aoyama production-hardly anyone cared.

For she sings musically and affectingly, with pathos and color and humor in the voice, in a manner to enfold the listener in the first row of the orchestra or the last row of the family circle, Miss Scotto is a singer for all price ranges. And they let her know it Wednesday night after “Un bel di” with as loud an ovation as has been heard in the House this or maybe even last season. It would seem to be a case of instant love between Miss Scotto and the New York public.

Opposite Miss Scotto, John Alexander as Pinkerton did the kind of clean, virile singing that has become habitual with him. He looked every inch the turn-of-century charmer, and made this ungrateful role not only feasible but sympathetic. Joann Grillo’s Suzuki was gracious and warm-voiced.

There were two other debuts-John Robert Dunlap as Sharpless and Robert Schmorr as Goro. Mr. Schmorr has been seen and heard in this role elsewhere in town, and it was no surprise that his special gifts of characterization gained a new dimension in the Metropolitan setting. Of Mr. Dunlap’s qualifications it is more difficult to judge. He certainly sounded and acted like an American counsel of long tenure, but whether this suffices for membership in our country’s leading opera company remains to be discovered. 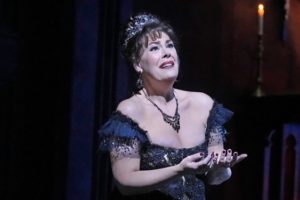 A journey to a star