And Hanson is as Hanson did it, too!

Think of it as the anti-Puritani. Think of it as the anti-Puritani: In Howard Hanson’s Merry Mount, straitlaced Calvinists of the Massachusetts Bay Colony are pitted against a bunch of rather cavalier Anglicans, hostile Indians [sic] and Satanic hosts, commanded by Lucifer and the Canaanite goddess Astoreth.

Astoreth is diabolical but also irresistible—at least to Puritan preacher Wrestling Bradford, who should know better, and is engaged besides to a mezzo maiden with the fascinating name of Plentiful Tewke. Richard Stokes’s libretto is said to have been inspired by Nathaniel Hawthorne, but little trace of it will be found in his story “The Maypole of Merry Mount.” The opera, half Hawthorne, half Freud, is far juicier.

New York found this out last night, 80 years after the Metropolitan Opera premiere, which starred no one less than Lawrence Tibbett. On Wednesday, Merry Mount was brought to Carnegie Hall’s Spring for Music Festival by the Rochester Philharmonic Orchestra. Hanson taught at Rochester’s Eastman Music School for over forty years and is regarded as a local celebrity.

Merry Mount was commissioned by the Met’s longest-serving general manager, Giulio Gatti-Casazza, an Italian of quixotic ideals: He would discover the Great American Opera if such a thing were to be found. Picture him in an explorer’s topee leading a procession of Met boxholders into the New World, supplies borne upon their heads.

Gatti commissioned fifteen such works and a couple of them endured a second season. None remain in the repertory. Merry Mount had nine performances. Tullio Serafin conducted. Mrs. Gatti, Rosina Galli, choreographed. There were 50 curtain calls and a live radio broadcast. It was big.

But European grand opera, theater where voice is the key to drama, did not prove transplantable to this culture. The only American operas of Gatti’s era that remain in the repertory are Porgy and Bess and Four Saints in Three Acts, and the Met took generations to get around to them.

That doesn’t mean, however, that Shanewis, Peter Ibbetson and The Emperor Jones are devoid of interest. Highly musical men composed them, though they rather lacked the melodramatic spark. There is a fascination in blowing the dust off now and then and, in the case of Merry Mount, genuine pleasure in the discovery. The music is colorful though the drama is pallid.

Hanson, who taught at Rochester’s Eastman School of Music for forty years, lived long enough to be miffed when the New York Times called his junior, Aaron Copland, “the grand old man of American music.” He suspected, correctly, that his own works were largely forgotten, though his second symphony turns up from time to time.

His mastery of intricate choral and orchestral writing were very much on display in Merry Mount. Lush themes limn the wilderness of primal New England in a romantic (and, for 1934, mighty conservative) style, punctuated with Straussian xylophones and wood blocks.

Love themes are fragrant, the hymn settings for chorus lively. The bacchanale of diabolic hordes lacked the frenzy Saint-Saens or Boito would have given it, but the drum-and-bassoon rhythms of an Indian attack on the settlers proved great fun.

When the corrupt antihero, Wrestling Bradford, having sold his soul to the Devil out of frustrated lust, confessed his sins, an epidemic of wild chromaticism broke out to illustrate the curses he has called down upon the colony, but this was the only time Hanson’s strait laces were the least bit awry. Sometimes one regretted that he never lost his academic cool, or ran off to the flickers with Korngold and Bernard Herrmann. Might have made something of himself.

Rather more to the point (as was noticed in 1934), the character-painting that Hanson so lavishly daubs upon his landscape and his choruses (Puritan, May Pole or Demonic) is strangely abeyant when individuals are front and center. Bradford confesses his sexual torment in wooden parlando, the ill-named Plentiful gets less than a duet, and a climactic love scene for Bradford and his adored Lady Marigold Sandys (aka Astoreth) is warm but brief. (An hour of music is said to have been cut from the score.)

Nothing dire is fleshed out. Hanson and his librettist seem embarrassed to do more than bring up the subject of sex: You know what they mean. Yes, we do; but tell us anyway, in song. Puritan society was mad enough for operatic treatment but, Bellini aside, didn’t really get it, double-fisted and flailing, until Robert Ward’s The Crucible, which benefits from Arthur Miller’s strong dramatic framework.

The leading roles on this occasion were well inhabited by the Rochester Philharmonic under its able director, Michael Christie, and the Eastman-Rochester Chorus, with the Bach Children’s Chorus of Nazareth College for a scene of Maytime games.

The mere characters of the story were also well sung. Richard Zeller, a sturdy figure with a tidy light baritone, proved capable of Wrestling Bradford’s enormous range and of suggesting his passions if not of making the rafters ring as Tibbett must have done.

Lady Marigold/Astoreth was composed for Göta Ljungberg, a Wagnerian who had just become the Met’s second-ever Salome (27 years after the fiasco of the first), and Sara Jakubiak gave evidence of this fach, with a dark, warm, well-produced soprano and glittering high notes, though lower ones faded under the hefty orchestration.

Charles Robert Austin sang the cynical Praise-God Tewke with impressive authority. To tenor Christopher Pfund fell the ungrateful part of Sir Gower Lackland, straining tightly through high tessitura for a brief love duet before being shot by the jealous Bradford, rewarded (after death) by getting to sing merry Lucifer as well. Baritone Keith Brown mezzo Ashley Hibbard were effective as Myles Brodrib and Plentiful Tewke. (Did librettist Stokes invent these characters to avoid duplicating any other names in opera? Is Plentiful Tewke Puritanese for Pussy Galore?)

It might be difficult to justify a full staging of Merry Mount in an era of budget cuts (though if they can give us Sly and Cyrano, why not?), but a concert with a top orchestra and chorus is exceptional fare, tasty, filling and utterly American. 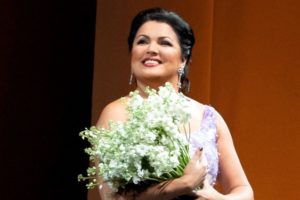