They love a piano

It’s difficult to reconcile what Schlather writes with what we see onstage, which is a jumble not only of pianos, but of periods and concepts. 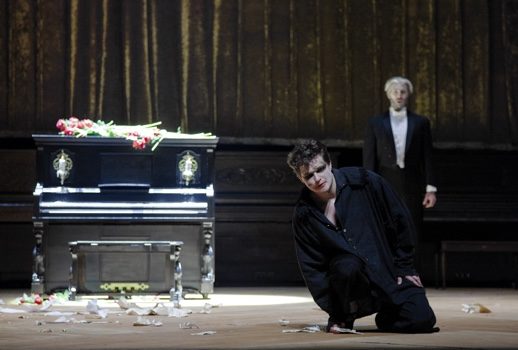 Piano, pianissimo, pianississimo. In music, usually this means soft, softer, and even softer. This time, though, I mean it literally: the musical instrument—pianos, more pianos, even more pianos. Uprights of various vintages are moved around strategically in arresting configurations. This forest of pianos is the only furniture on the stage, aside from a bench or two.

What has it to do with Don Giovanni? I’m still trying to figure it out.

It’s an especially pointed question because there can be no opera more in the crosshairs of today’s cultural landscape. It begins with a rape and a murder. Three hours later, the Don is finally called to atone…but not before he has abused his power and destroyed any number of lives and relationships, all in the pursuit of some kind of malicious macho pleasure.

R. B. Schlather, who directed this Curtis Opera Theatre/Opera Philadelphia co-production, is very aware of the pitfalls. He outlines them himself in a thoughtful note to the audience, where he admits that approaching Don Giovanni—an opera he learned to love as a youngster—is now fraught.

But it’s difficult to reconcile what Schlather writes with what we see onstage, which is a jumble not only of pianos, but of periods and concepts.

I shouldn’t even start on the costumes, which Schlather did himself—we’d be here all day. I’ll just say that Masetto becomes a grotesque dress-up doll, in everything from a ruffled pinafore to overalls and a leopard camisole. That baritone Charles Buttigieg nonetheless manages to comport himself with some dignity is a minor act of heroism.

I’m assuming there actually is some concept at work here, but the best I can do is relate what I saw. The first act looked like a fauvist riff on a Roman comedy, with Elvira—usually portrayed as a patrician—here a kind of bag-lady grotesque. The second act, still opaque but far more streamlined, was often striking to look at, with especially effective lighting design by JAX Messenger and Christopher J. Frey. 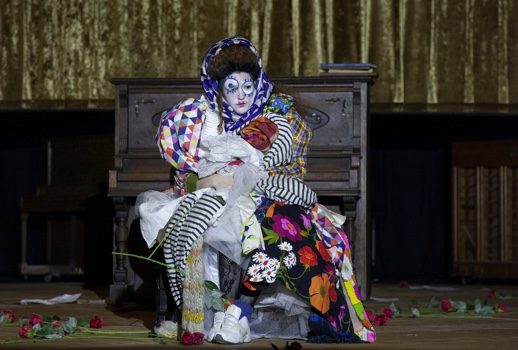 More generally, the tone Schlather evoked was often darkly comedic, and some of the opera’s prickliest problems—sexual assault, class warfare—were largely sidelined. Instead, there was quite a bit of performative winking, as when, in “Madamina,” Leporello produces a sheaf of opera singer head shots (they included Popp, Callas, and Schwarzkopf—Walter Legge would have been delighted).

On a musical level, things were considerably more integrated. Rising star conductor and Curtis alum Karina Canellakis led an incisive, often propulsive reading of the score. For the most part, even her extreme tempos—a speedy “Il mio tesoro” and a huge tempo shift from recit to aria in “Mi tradi”—were persuasive.

The orchestral playing was excellent, and the continuo—by harpsichordist Lisa Keller, with an occasional assist from other instruments—was exceptionally imaginative.

Leading the singers was Dennis Chmelensky as the Don. His lovely and solidly produced lyric baritone would likely make less impact in a large house (Curtis’s Don Giovanni was performed in the Kimmel Center’s acoustically grateful Perelman Theater, with just over 600 seats), but he met all vocal demands honorably.

Chmelensky is also a marvelously subtle and physically dexterous actor. (Here, he looked all of 16 years old, which—given the character—was intriguing and frightening.)

Lindsey Reynolds, her ravishing lyric soprano as fresh as a brook, was a vocally ideal Zerlina. To the extent Schlather’s bizarre take on the character allowed it, she was also lively and charming. She’s impressed before in a supporting role in Dido and Aeneas, and more so as the Beggar Woman in Sweeney Todd. Surely, Reynolds is one of Curtis’s artists to watch. 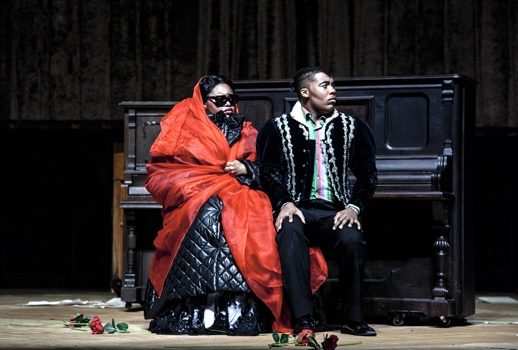 Vartan Gabrielian was a vocally and theatrically powerful Commendatore (the character is meant to be seen only at the beginning and end of Don Giovanni,but Schlather has him haunting the stage at numerous points.)

The rest were a more mixed bag. Tiffany Townsend (Anna) has an impressively large-format soprano and a grand sense of sweep, but her pronounced vibrato often obscured pitch and musical details. Sophia Hunt (Elvira) brought superb diction and a wonderfully alert sense of text—it’s a fine voice, but needs more float at the top for this role.

Adam Kiss (Leporello) was a crowd-pleasing Leporello very much in the buffo-basso tradition—he certainly delivered the goods, though I prefer a subtler take on the role.

I’ve already mentioned Charles Buttigieg in the context of his costumes; vocally, it’s a promisingly dark-hued baritone. For his sake—all our sakes, really—I hope his next appearance allows him some dignity on the stage.